So back on the 28th May, we were invited by the Bitcoin Association Northern Ireland (BANI) to attend their first regional meetup, which took place in the Boden House Coffee Company on Ormeau Road in Belfast. Founded by current Coin Telegraph UK editor, Niall Maye, the organisation has been set up to represent bitcoin interests in the North.

Not that we really get involved in formally joining organisations here at Bitcoins in Ireland, but I got the train up from Dublin, and after two and a half hours arrived at Belfast Central. I wasn’t aware that Belfast doesn’t seem to have a single taxi that can pick you up off the street, and nothing on Hailo, so after a few minutes, and given the reasonable weather on the day, I decided to walk the mile and a half to where the meetup was going on.

The Coffee Shop is one of Belfast’s first to accept bitcoin, and it wasn’t hard to find where to go when I got there. There is Bitcoin Accepted information in the till area, and against the back wall there was a presentation screen set up, with about a dozen people. Bitpay had sponsored the event, with literature on display to take home, and someone had gone to the effort of baking some very tasty bitcoin biscuits was a nice touch.

So during the evening, Niall had given a presentation on bitcoin, explaining what it is, how it works, and their goals as an organisation. They will be making submissions to the UK Government, and with currently zero VAT on bitcoin transactions, Belfast has seen a knock on affect from the UK semi-legislating for bitcoin. A number of cryptocurrency companies have set up in the city in the last year or two, adding to it’s already well established tech hub. The presentation is available here as a PDF.

Afterwards, there was a social for a few hours, with people having general chats about bitcoin. The crowd included a diverse mix of people, with a range of entrepreneurs, programmers and students sharing their opinions on the scene in the North, and bitcoin in general. Our sister company, Bitcoin Marketing Team was one of the sponsors on the night, and as a number of people hadn’t seen a bitcoin transaction in-person, we made the transaction in front of everyone, donating 0.25 bitcoin towards the event’s running costs. 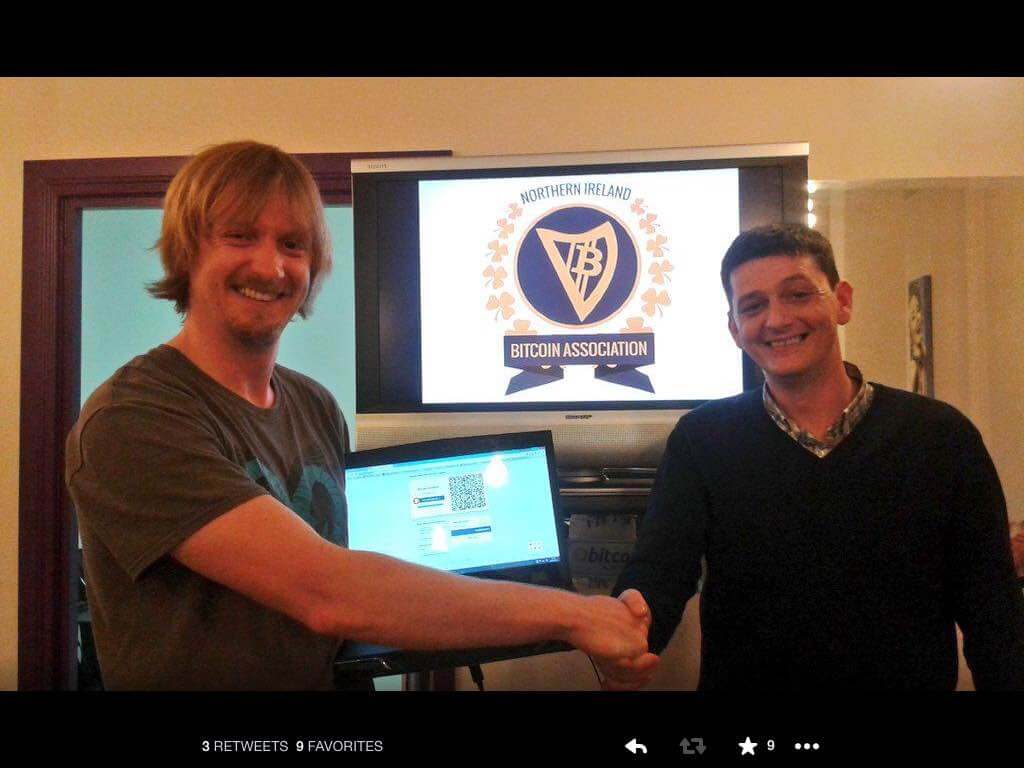 BitcoinMarketingTeam.com after giving our donation

At the end of the night, I paid my bill using the CoinKite terminal the store uses, and where they sell bitcoin vouchers. This was a little different than the ones I’ve used in getting bitcoin in Dublin at GSM Solutions, as the staff simply printed off a paper voucher, which was brought over to the table, and then paid using my mobile wallet. This is the first time I’ve seen this in action, and it works pretty well, with the alternative being paying at the till.

We returned back to Dublin later that evening, after an interesting night. While the scene in Belfast may be coalescing a little bit behind the Dublin scene, there’s a dedicated and enthusiastic community beginning to form in Northern Ireland and Belfast, and I’m sure there will be plenty of exciting projects coming soon.

On the blockchain for 528,696 blocks and counting

Looking for a low-fee EU based crypto exchange? Try Coinmate, or read our review.

If you'd like to get access to cash with your crypto without selling it, SALT Lending offer loans in most US states and a number of countries (including Northern Ireland & UK, but not Ireland). Loans are available from 3-12 months and start at $5000, with competitive interest rates from 3.5% and your crypto is returned to you once loans are repaid. Sign up using code J85qDkQVL and get $50 in bitcoin when you take out your first active loan.