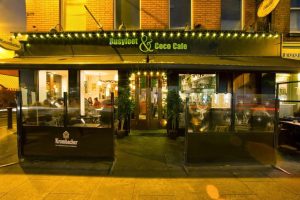 Last week, we attended the Bitcoin Dublin Meetup for the second time. Our first time attending had been listening to Coinprism at the Guinness Enterprise Centre, but this was a more informal social meeting that is running every second Wednesday from 6.30pm till about 11pm.The venue was Busyfeet & Coco on South William Street, which I know well from the time I worked up the street in the Xbox Live Gaming Centre. It recently began accepting bitcoin in it’s restaurant and bar, giving people visiting Dublin with bitcoin a place to get some nice food, drinks and coffee. It also plays host to Dublin’s second, and the southside’s first bitcoin ATM, which we’ll review in a separate piece.

I got there a little early on the evening, and the staff pointed us to a reserved space. I settled down, and within a couple of minutes a few other people came into the place. After introductions over a beer, there was good craic and banter with people asking about bitcoin, or sharing stories if they worked in the space. As with before, there was an interesting mix of people – miners, developers, a few people from finance and investment backgrounds, a couple of people studying bitcoin, and someone working in one of the newer finance technology companies.

As the night progressed I figure about twenty people came across, with over a dozen there at the end of the night when it closed down. I paid my bill on the night by paying in bitcoin as well, and will be reviewing this process shortly so that other merchants in Ireland can see how it works. We’ll be attending future socials there as the evening was enjoyable, and you can see the schedule and  sign up for alerts at the Bitcoin Dublin Meetup.

On the blockchain for 545,714 blocks and counting