So the other day I was looking to buy some bitcoins, and had a very difficult time trying to purchase a small amount of bitcoin with normal consumer payment methods.

So giving up on that, I had heard that the guys in GSM Solutions on Upper Abbey Street (between Jervis St and Four Courts Luas stops) sold Bitcoin. They have a Bitcoin ATM there, but for speed (and because I have a PC wallet and didn’t want to have to install a mobile wallet) I opted to go for generate bitcoins from their till, just like phone credit. 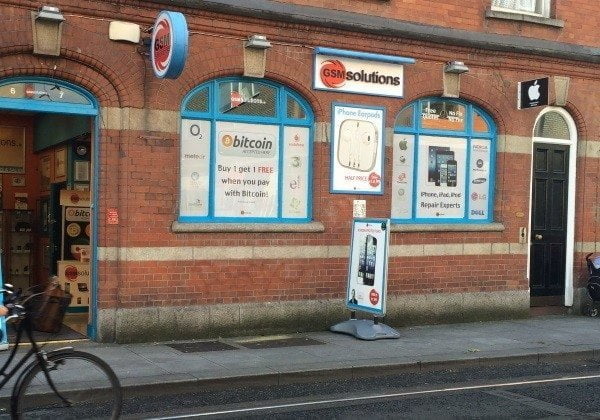 I asked if there was a minimum, and they responded that any amount over €5 was grand. So I decided how much I wanted to buy, and had €30 on me so got that. In about a half a minute, they had printed off my bitcoins voucher. When I got home, I just had to visit the URL on the reciept and enter in my code and where I wanted the bitcoins sent. Immediately, my Bitcoin Armory wallet flashed up that a payment for the amount was received, and began confirming it.

So in review I found the process of buying bitcoins with cash very straightforward, much quicker, and less hassle than I expected. I’ll go back soon to try buying bitcoin using their ATM option

If you're looking for an decent and reliable EU based exchange, we recommend and use Coinmate which is a very low fee exchange with a maker/taker model, that offers Bitcoin, Bitcoin Cash, Ethereum, Dash, Ripple and Litecoin. You can also read our Coinmate review.