I’ve had bitcoin core installed on my machine for several years now, as up until recently I had been using Bitcoin Armory to manage my bitcoin. However, a couple of issues have been cropping up recently which have made it unreliable due to hardware issues, and in the space of three or four weeks I had to rebuild the blockchain several times. This is a painful process, so I thought I’d write an article to explain what caused the problems in my care, and some advice on people who find themselves in the same situation. 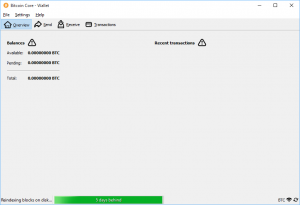 So probably due to the fact that I banjaxed my laptop by mining bitcoin, I had intermittant power problems which meant that my laptop would cut off unexpectedly. If this happened while bitcoin core was open, and it couldn’t shut down properly, the next time I booted up I would be left with a corrupted blockchain on my computer. With the way bitcoin works, and the removal of an option to download a torrent of the blockchain, and pick up from there, in each of my cases I had to rebuild things from scratch. Now when I started in bitcoin, the blockchain was about 8gb, but nowadays it is nearly 80gb.

While the blockchain is rebuilding the blockchain, it’s a painful process. Your CPU will be going at full whack, meaning that multi-tasking can be very slow. While the first year or two flew through, as time went on and it got more up to date, the load speed really ramped up. About 80% of the blockchain loaded, and since summer 2015, the number of transactions increased dramatically, making it very long and arduous to go through the more recent days. So certainly if you have to do this, don’t expect to use your computer in the meantime.

The blockchain is downloaded via a peer to peer basis, so you are reliant on the network. The download was not continuous, as it downloaded a chunk of blocks, and then crunched them before moving on. When I compare the amount of time it took over wifi (2 and a half days) versus being hard wired into the network (3/4 of a day), it really does make a difference to be plugged in.

Also, opening the ports to make it operate as a full node made a difference in the number of peers I could connect to. While not having these open, I had eight connections in, and none out, and after opening the ports, this increased to about 13 in, and six out. Being connected to more nodes did make a decent difference on the time involved in downloading the blockchain. 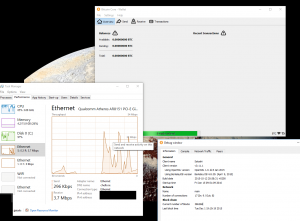 However, in my case, using Bitcoin Armory on top, with the repeated corruption of the blockchain, a problem with Core rendered me locked out of my coins. Looking for alternatives, in the end I took a recommendation from some friends and invested in purchasing a Trezor wallet for $99. Why? Well being locked out of my bitcoin on two separate occasions when there was a massive price spike in bitcoin, and then having to spend the time waiting while everyone else had fun trading made running anything based on bitcoin core unreliable. So it is with a sad heart that I migrated all of my bitcoin out of the wallets, and uninstalled both (recovering 160gb from my hard drive).

On the blockchain for 546,825 blocks and counting