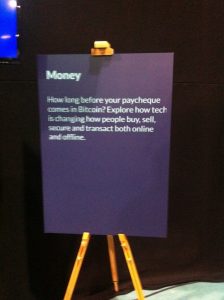 The Profit Margin’s Jim Fitzpatrick and Bitcoin Core Developer Gavin Andresen took to the stage of the Money Summit on Thursday 5th November. It was a rapid fire fifteen minute talk, so this articles gives an outline of the talk. I’ll just qualify that there may have been some paraphrasing to keep up, so the transcript below is not verbatim.

A packed room saw the two join the stage, and they got stuck right in.

Gavin Andresen: The volatility has shot up recently, driven by China.

JF. is the tech secure, will it survive. there’s limits as on what it can do to grow.

GA. Pushing the scale up the system. When there are too many transactions to process, it’s a good problem to have. It’s an open protocol, so making changes is messy. If you’re a company, you can just do it. When it’s open source, governance and decision making is hard.

JF: Getting consensus on changes?

GA. Yes, you can ask ten engineers for a solution and get 11. We want to find the best solution poeple can agree to.

JF. Are you confident this will be reached? ie 7 transactions a second, not thousands.

GA. I’m confident it will get solved, because everyone agrees it needs to be solved. We’re just quibbling on how.

JF. The tech is starting to reach the mainsteam.

GA. Yes, the Economist had the blockchain on the front cover recently. The idea of public ledgers is taking off in the finance world, as it removes some layers of middlemen. This could improve profits.

JF. Some people bring idealogical opinions. How do people view the likes of a Central Bank getting involved?

GA. There’s a bit of that worry, if it grows too fast, some ideals will be lost, such as permissionless innovation. The tech is open, I don’t see it being closed any time soon. If I was evil and wanted to compromise those ideals, I don’t think I could. We want an open system that anyone in the world can participate in.

JF. What about when you have banks talking about private ledgers?

GA. I have seen two interesting observation. Academics look at 6 banks to synch with each other. Why not use SQL. Bitcoin evolved in a very harsh world, very open to hackers, on the open internet. It has strength on this. We have to presume there’ll be attackers. Private networks might not have had that.

On the other hand, bitcoiners aren’t sure why these are coming. they’re not designed to be a new currency or an open platform. They’re purely designed for problems financial platforms have.

JF. The openness, what about Satoshi. What was his motivating force?

GA. I may be projecting. I think he was a little like me. He was inspired by his idea, partly for the tech. he knew the story of the cypherpunks, who set the cryptography infrastructure. He was also frustrated with the current system of money, banks and currency. Bitcoin was an open, free, less subject to manipulation alternative.

JF. When you see the people who don’t know each other, make a dependable ledger, what do you think you see the tech will be used for?

GA. We’ll see financial institutions who have trust between each other, working in the design space of permission ledgers. Like frenemies, who are competitors who need to collaborate if everyone can agree and support it, and there isn’t 100%. Lots of progress in the short term. Longer term, in places where there is little or no trust. ie the black market (an early adopter), which I wish wasn’t so.

JF. You gave them a way to get around that issue.

GA. Yes, with online video though this came around because people didn’t want rental history. Which has gone online. Bitcoin was an option for for places like this, but there’s also cross border payments where there’s less trust, because of distance. Over time, I expect bitcoin to move up this trust ladder. In time I hope mom and pop stores will integrate it. There are also new use cases which weren’t possible, such as machine to machine payments. If you’re a robot, you can’t open a bank account. But you can have a bitcoin wallet. We’re seeing a really interesting art project. Send bitcoin to a machine, and if it gets enough it thrives and produces, and otherwise it drives. Such self driving cars that own themselves. Most will probably fail, some will stick. interesting to see what happensin the next 20 years.

JF. We’re seeing governments get in, where trust in their own officials. Could they be a benefit where corruption is an issue.

GA. The trust equation. How do you get it back when you lose it. Registries and Titles can get lost, so there are applications there that people will experiment with.

JF. Now people are experimenting, Economist covering it, Bank of England. Is it mainsteam?

GA. Not yet. It’s still an experiment, and it’ll remain that way until it’s boring. Once it’s in the back page of the economist, maybe then. I hope we get there.

JF. The value of the currency is a few billion

GA. the value of the currency is a drop in the ocean. Most people I meet don’t have a good understanding of what it is, or what it’s good for.

JF. What good will it enable through changes.

GA. I don’t know. I’m fairly moderate about predicting how one piece of tech. I’m sure there’ll be changes I’ve imagined that won’t happen, and ones I haven’t that will!

Read our writeup on Bitcoin at Web Summit, or the transcript of the Sean Neville talk

On the blockchain for 546,603 blocks and counting